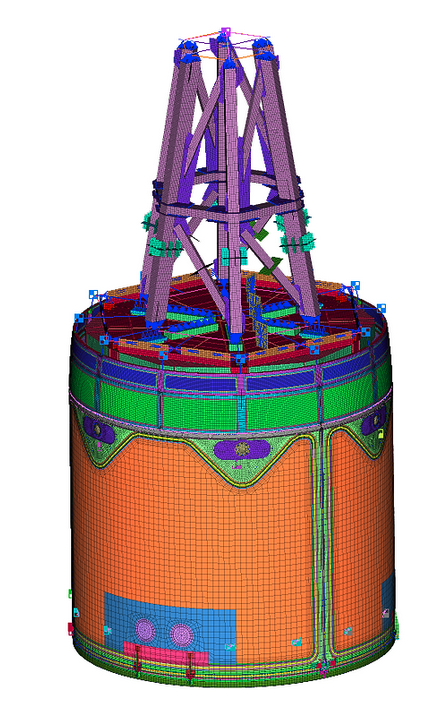 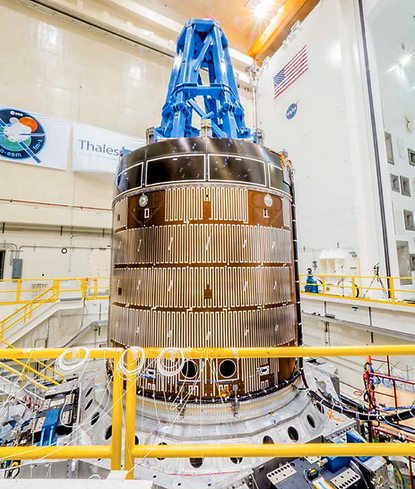 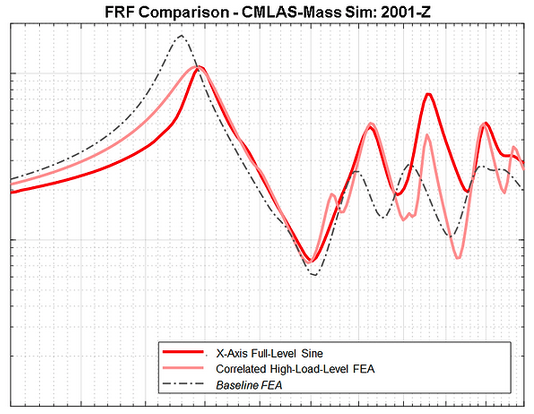 Quartus performed an independent FE model correlation of the E-STA for NASA’s Engineering and Safety Center (NESC). Raw transient data was processed for sine vibration tests of varying load levels. Control validity was investigated through a number of different data processing metrics and test fixture analyses. Frequency response functions (FRFs) were generated for a large number of accelerometer and strain gauge responses. Mode shapes, frequencies, and damping values were extracted for all primary modes. Time histories were examined in an attempt to determine the location and onset of nonlinear behavior.

Starting with an existing system-level E-STA FEM, Quartus implemented a number of modeling updates to better represent the test article, increase detail near critical joints and features, and add load path connections that were unintended in the design yet suspected/observed in reality.

Based on the nonlinearities discovered from the data processing, along with a modal frequency sensitivity study on the FEM, a subset of joints was identified as most influential for the observed nonlinearities. FE correlation trade studies were performed and two linear correlated models were produced – one correlated to high-load-level test responses and the other correlated to low-load-level responses. Variations between the models were ultimately limited to modeled properties at three joints. Due to joint behaviors varying for different frequencies and load levels, a single correlated linear model was not possible.

The correlated FEMs exhibited significantly improved test correlation relative to the baseline FEM, confirming the identification and bounding of critical nonlinearities. Results were presented to several NASA review boards and functional groups. Additionally, a method for nonlinear dynamics modeling and correlation was developed and recommended for future CLAs.