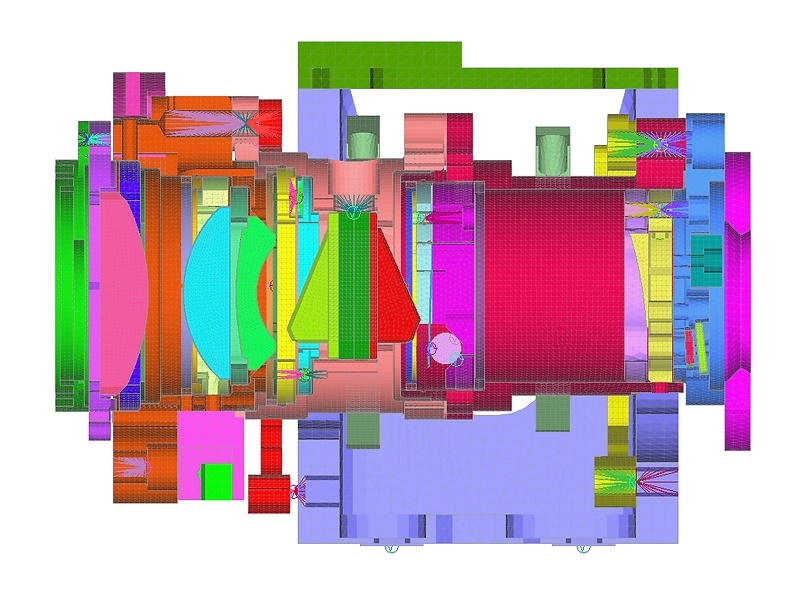 Arcstone is a NASA mission concept that provides a solution to the challenge of achieving required instrument calibration accuracy on-orbit in the reflected solar wavelength range. The Arcstone instruments are required to provide spectral measurements in a thermal environment that varies by 40°C or more depending on whether the instrument is in direct sunlight or shade. A Structural, Thermal, and Optical Performance (STOP) analysis was needed to assess the robustness of these instruments in this thermal setting and to highlight areas for possible design improvement.

STOP analysis begins with generation of thermal and structural finite element models (FEM) of sufficient detail to capture distortions on each optical face along with the focal plane. For Arcstone, two instruments were modeled to capture the two different wavelength regions of interest: ultraviolet-visible (UV/VNIR) and infrared (SWIR). These models included solid element representation of all optics, retaining rings, housings, and mounting articles. Thermal analysis was conducted in Thermal Desktop to represent the thermal vacuum testing that each instrument will undergo. Transient hot and cold cases were analyzed and temperatures throughout the assembly were calculated. Effects of the cryocooler and TECs for temperature stability were captured. Temperatures at multiple timesteps were mapped to detailed thermoelastic FEMs for analysis using NX/Nastran. Distortions throughout the models were calculated based on applied temperatures and material properties. Effects of the retaining ring preloads and sliding friction under thermal loading were examined in a variety of trade studies. For each optic, Zernike coefficients were calculated from nodal distortions using Quartus proprietary STOP software. These coefficients along with each optics’ average temperature were applied to the optical model in Zemax by a collaborative team at Resonon. Working together, the NASA, Quartus, and Resonon teams examined the final optical performance and model deformations to determine areas of design improvement. The final designs for both instruments were shown to meet all performance requirements.